A hundred meters East of Palaio Zervochori in Naoussa Municipality, there is one of the oldest settlements in the greater region of Central Macedonia. It is the wetland site of Palaio Zervochori. This is where the old Lake of Giannitsa or Lake Lydia began, the drying of which was completed in 1937. The point is also well known from the battle that took place there on November 14th, 1906 between Greek Macedonians and Bulgarian Komitadji, in which Tellos Agapenos (Argas) played a very significant role. In fact, this battle is very eloquently described in the novel by Penelope Delta, “Ta Mystika tou Valtou”, the title translated "The Secrets of the Swamp".

The wetland is better known to local residents as "Maritsa" due to the name of the river crossing the settlement. Today, 33 species, of great diversity, live on its banks. These include various species of fish, such as Cephalopola, Red and Black Platforms, a rare species of Goldfish, the Cypriots (or commonly Grivadia), the Butterflies, the Perks (or Prikia), as well as the black Briana, one of the most scarce and rare fish, with the characteristic black spots on its body. You can also find crabs, turtles, frogs, beavers, European otter, mussels, black large crayfish, mallards, moorhens and cormorants. In winter, it hosts migratory birds such as the Silver Pelicans (Pelecanus Crispus), wild geese and even swans.

In the year 2011, with coordinated actions by the municipal authority and with a substantial contribution by local volunteers, large-scale cleansing and planting took place along the river. So today, there are more than 200 ornamental trees in the region, such as Platanus of various species, Oak trees, Filira-Tilia Tree, Platanomuria, Wild Mulberry tree, Platanospendams (Maple Tree), Alder Tree, Liquidambar, but also Tulip Tree. All of this has helped to upgrade the ecosystem and now a beautiful area has emerged, which is offered for various activities, such as one day visits, strolling, rowing, as well as educational excursions of elementary school pupils. 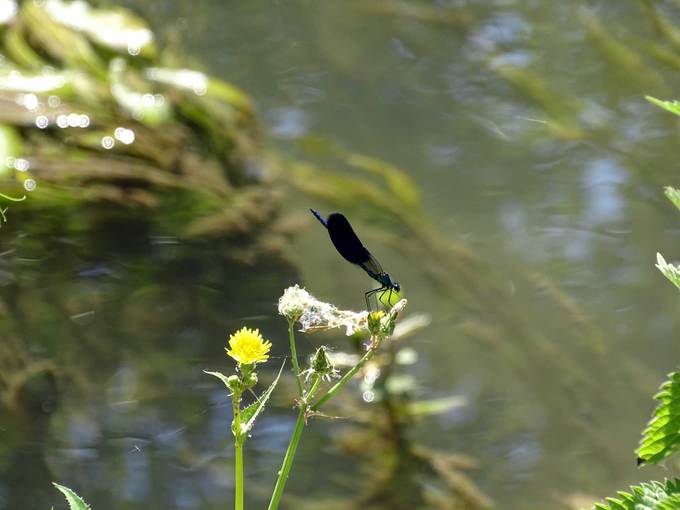